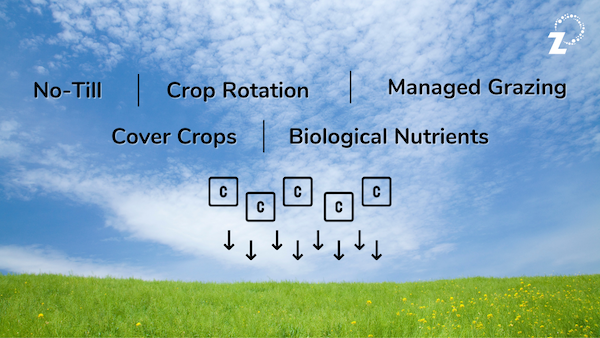 Industrial agriculture has displaced billions of tonnes of carbon into the atmosphere. Growing and processing food contributes to more than a quarter of the world’s carbon emissions. As such, agriculture is a major contributor to climate change due to the catastrophic loss of soil organic matter from commercial ploughing, chemical inputs, habitat destruction, and poor grazing practices. These modern agricultural practices damage the microorganisms upon which carbon-rich soils depend.

In South Africa, the average predicted soil loss rate is 12,6 tonnes per hectare per year (ha/year). The average soil loss rate under grain crops is even higher, at 13 tonnes/ha/year. Both these soil loss rates are far higher than the natural soil formation rate, which is less than 5 tonnes/ha/year. In simple terms, we are losing much more soil than we are gaining. And if the world’s population continues to increase to 9.7 billion in 2050 (as predicted by the United Nations) farming practices will have to change.

How is carbon sequestered?

The plants we cultivate to produce food, feed, fuel and fibre use carbon dioxide from the atmosphere to grow through the process of photosynthesis. Through the symbiosis of microbial systems in the soil and photosynthesis, carbon is taken out of the air and converted into liquid sugars. Up to 40% of these carbon sugars are fed to the soil microbiology, where they form humus, a stable carbon that remains in the soil for decades. The carbon is needed for the soil to function, so it’s not stored permanently, but slowly cycled within a large, stable sink in the soil part of the carbon cycle.

So, natural drawdowns can occur in agriculture. And, rather than pumping out carbon emissions, croplands can become a carbon sink. This is achieved through regenerative farming methods and soil health practices.

Modern industrial agriculture has resulted in enormous environmental damage and the significant emission of greenhouse gasses. Constantly fighting against nature’s way of doing things has broken balanced carbon cycles. In contrast, the defining principles of regenerative agriculture are designed to mimic a comparable native ecosystem. This includes:

Crucial in regenerative agriculture are composted biological materials such as crop residue, food waste and animal waste, all of which contain carbon. When incorporated into soils, the carbon breaks down slowly, building stable soil organic matter.

By their nature, regenerative farming principles improve carbon sequestration in agriculture. By changing to working with nature instead of against nature, we can start to fix and accelerate these broken carbon cycles and reduce environmental and climate damage.

In practice, for farmers to reduce emissions and reinstate natural carbon cycles, they need to adopt regenerative farming practices. These include:

How much carbon dioxide can regenerative agriculture remove?

A growing body of scientific literature is identifying the potential of regenerative agriculture in sequestering carbon. Research highlights the role of regenerative agriculture in helping to mitigate climate change while making farmland more productive and resilient as the planet warms. A 2019 report by the National Academy of Sciences claims that changes to farm practices could sequester as much as 250 million tonnes of carbon dioxide (4% of the country’s emissions) annually in the United States.

The limitations of soil-based carbon sequestration

There are hundreds of millions of farmers around the world, many of whom farm on small plots of land or subsistence farms. To take full advantage of agricultural drawdown as a climate change solution, we would need as many of them as possible to change the way they farm forever. This presents a massive social and economic challenge.

By its very nature, climate change is also making it harder for soils to store carbon naturally. Warming of the planet speeds up the decay of soil organic matter, which could lead to widespread soil carbon losses.

These are just two examples of the limitations of soil-cased carbon storage. Nevertheless, every farmer who adopts regenerative farming is part of the solution. And to stop global warming, agricultural efforts to store carbon must be coupled with drastic cuts in greenhouse gas emissions.

The future impact of climate change on agriculture does not paint a pretty picture, particularly in Africa. It is clear that regenerative agricultural practices, adapted to specific regions and crop types, can and should play a major role in mitigating climate change. Simply put: we need to start emitting less and drawing down more carbon.

Fortunately, our understanding of soil microbiology and sustainable farming methods has advanced significantly in recent years. This means that, with time, regenerative farmers can produce yields that compete with industrial farmers while reducing their greenhouse gas emissions and agriculture’s carbon footprint.

Curious to learn more about incorporating regenerative farming into your operations? Reach out to the experts at RegenZ.